Your guide to basic xmerge variables: what are they?
what can they do?

It’s important to get your head around variables, they are common place in many templates these days and they are an essential building block to improving your coding knowledge and your code in general.

Some of their benefits include:

So what is a variable

Variables are any value or piece data that has been assigned  – and is now stored in the coding and then executed in the merge process of your templates.  They are defined in the coded template themselves which means unlike the data you call from xplan which is immutable your variables are dynamic and can be changed, updated or overwritten.

In XPLAN we know double equals (==) is for comparing data, single equals is for assigning data.  So to create and define a variable, we let or assign it (=) as shown below:

Here we are defining a variable named “numbers”:

More examples of this:

Above we created 3 different variables (“number1”, “number2”, “calculation”), I can call them anywhere throughout my template as needed including in sentences, such as below:

“Dear John, you recently told me your favourite number was <:=number1:> and your second favourite was <:=number2:>.  I can add and divide these to get <:=calculation:>.”

Now that sentence is not a very good practical example of where we might use these but it does show how easily they can be inserted into your template and called.

Lets look at a practical and common example:

This variable is cleanly and aptly named “total_net_income” and can now be called and utilised any time throughout my document to reduce repetitive coding and calculations – but also make the overall coded document easier to read:

You can imagine how clunky the full net income calculation would be if used in that sentence, however by using a variable our conditioning and our sentences are all cleaner and easier to read.  Most importantly though we can call and use the “total_net_income” variable again and again throughout the template.

By defining variables at the start of the template or when its first to be called, we can carry over a variable throughout an entire document to make things even easier and cleaner.

Naming is one of the most basic examples of where we can see clear benefits:

While this has improved and in general there should be no blank preferred names these days, it is a good example to look at for using variables and getting the best of two worlds – ease and redundancy.

Let’s breakdown the above:

Variables can also provide an alternative path for how we can get the data we want.

Lets consider an asset table that only includes specific assets, something you sometimes find in advice documents and fact finds (broken up by asset type): 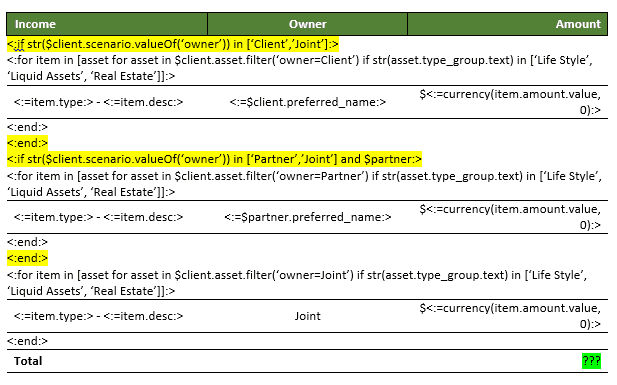 Because we are targeting specific assets and because the document could be for client/partner we can’t use the $client.total_assets coding. We are likely to write at least 2 if statements summing up those groups for those conditions – in that space it’s going to appear convoluted.

What if we built a running total of what appears on the page – as we’re iterating (looping) through all our assets. 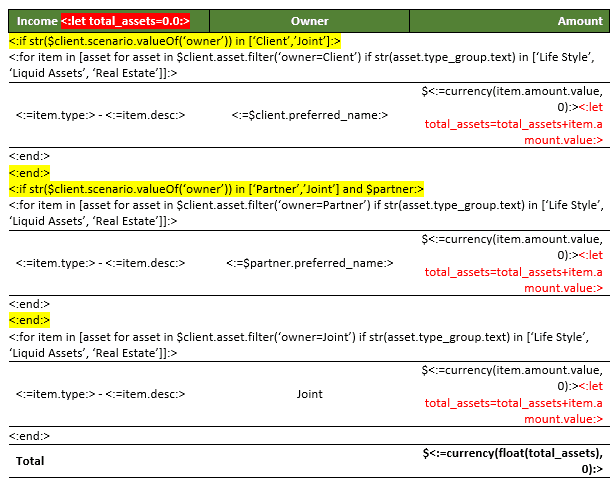 When to use a variable

There really isn’t a hard and fast rule on this other than to consider if a variable is needed: is it the best solution and will it make your and the next persons task easier?

Like anything it requires balance and thought.If we look at our ‘clientName’ example though its easy to see the benefit of this approach:

Advice Technology Consultant | Digital Advice at Create Something
Matthew is an experienced and innovative Xplan consultant and developer, having worked on and developed some of the largest advice projects in the industry. Passionate about building great experiences in xplan that enable businesses and clients to get the most out of this powerful software.
Xplan CodingXplan XMERGE
Share This
Related Posts

Kodee our xplan xmerge chatbot recently launched! Let's take a moment to look at some of the broad data that has come out of the 1st week of go live.

Another example of a key function that often gets used. Here we build up on our previous work with sentence syntax and join() function to see how it can deliver on less code, consistency and ease of readability.
Copyright Create Something 2019 | Privacy Policy
Back To Top
×